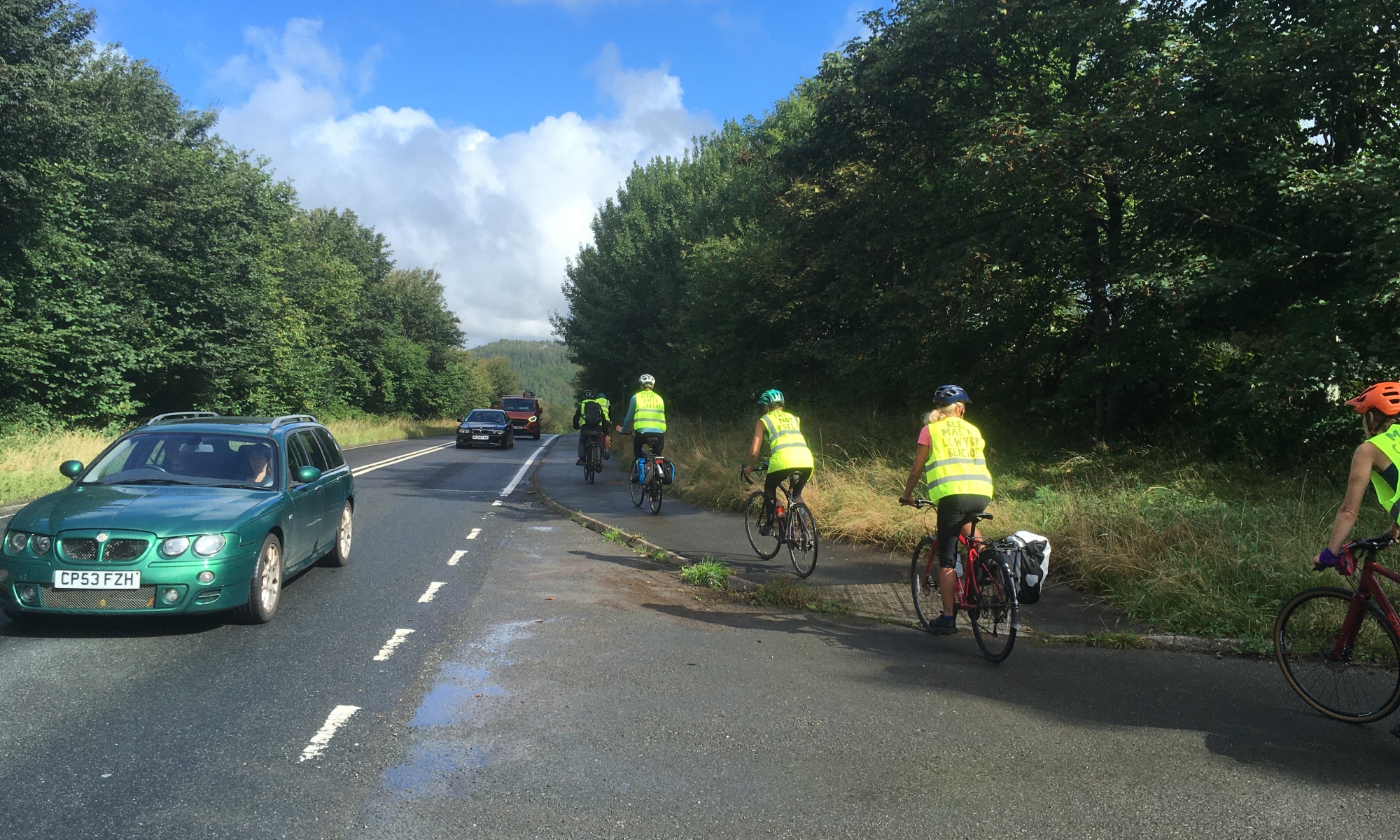 After 16 months of making the case for things I believe in via zoom I at last took part in a real-life protest on Sunday. Joining with ten other rebel riders, I cycled the dangerous A487 from Aberystwyth to Machynlleth to demand safer cycling and walking routes between the two towns and all the communities in between. It felt like I had finally come off mute! The rush of togetherness, camaraderie and shared purpose that can only truly be claimed in real life. Besides, you can’t really make the same point about dangerous roads without putting something of your actual real physical self on the line.

Those of us who know the A487 know how dangerous it is. I have cycled thousands of kilometres around Wales and Europe but have deliberately avoided cycling the length between my two closest home towns. There is very little joy in it. After my experience on Sunday the likelihood is I won’t do it again until we get cycle and walking paths along the whole route. Car after car overtaking dangerously on near blind bends into oncoming traffic. We shouldn’t forget that the absence of a path for walkers and cyclists puts car drivers at risk too. This is probably one of the most impatient roads in Wales and impatience is a killer.

But I have a choice to avoid the road that those who live along the route don’t. Jasmine Berry is one, and she reminds us in her blog for the Institute of Welsh Affairs that local people risk life and limb every day. Drawing the parallel with the Tour of Britain which recently passed along the road she points out that local people don’t get the luxury of rolling road closures. The risk is very real. The mayor of Aberystwyth Alun Williams rode with us and reminded us in speeches along the route that Ceredigion Councillor Paul James lost his life on this same stretch of road training for a charity cycle ride.

I passionately believe in the power of cycling to transform lives but so many people can’t get started because their safety isn’t prioritised. Cycling should be a joy but how can you be joyful living in fear? I am lucky to live on quiet roads and cycle an hour a day before work. My daily ride is my personal commitment to staying healthy. My meditation. My mental health tonic. My defiance of the ageing process, as far as that is possible. I want everyone to have that choice if they want to take it.

I was 46 when I started to re-discover the joy of cycling. Then I was two stone overweight, anxious and stuck in repetitive self-defeating patterns. I made a commitment to myself to complete one one-hour ride once a week, to see if there was life in the old dog. Yes it was hard work at first but I noticed how much happier I was after each ride. This promise grew to twice, three times a week. I started to realise that I was not the person I thought I was. I was actually someone who needed a lot of exercise to stay happy. Having barrier blocked myself by saying I was too old to start doing this much cycling I realised that most of what I knew about myself was not true. Now I feel fitter than I ever have and my mental health has never been better, but even after a few weeks of cycling the difference was noticeable.

I started to set challenges – each one developing my strength a little bit more. I saw new possibilities emerging. When I was made redundant aged 47 I set myself the challenge of cycling at least in part every country in Europe. Covid interrupted that odyssey but so far I have cycled about 6000 km in 16 countries, mostly carrying all my camping gear with me and travelling as cheaply as possible. And having cycled through many of those countries I know that Wales has not fulfilled its potential as an active travel nation in the same way that other countries have.

Yes we have some great cycle paths and routes but many of them are for epic cycle rides, not the day to day rides many of us want and need to take. Cycling becomes not for the everyday rider but for the sportsman, the dare devil or on busy roads for the fearful brave. And where there are great family rides we often have to load up the car to get to them.

I cycled the whole of the Netherlands on cycle paths, across Germany on paths and quiet roads. In Austria I cycled 500km along a paved pathway that takes you across the whole of the country following the Danube. In Spain there are cycle paths on almost all main roads and by law drivers have to give you 1.5 metres when passing. I can’t wait to get to Denmark!

Wales is a small country. We have the opportunity to make a difference for the health of our people by connecting our communities. There is a lot of talk about the foundational economy, but what could be more foundational than communities connected together with safe cycle and pathways. That everyone can use. We would get out more. See what other people need. Ask what we can do for one another. It is so much easier to say hi and how are you doing when you’re on a bike or walking than when you’re stuck inside a car. My rides are often disrupted by conversation!

I rode on Sunday to show my support and solidarity for the people who live between Aberystwyth and Machynlleth. I used to live in Derwenlas, one of the villages we rode through, and remember very well how the arrival of the 2 mile cycle path there to Machynlleth opened up my world, living as I did without a car.

That was almost two decades ago and what has happened since for walkers and cyclists on the road? A piecemeal and wholly inadequate addition of a few hundred yards whenever the road is improved for drivers. As you can see from these pictures these paths are a welcome respite. I am grateful for them but they are not enough. Set against our targets on climate, wellbeing and health we can do better. Let’s connect all our communities with safe cycle and walking paths and deliver the change we need.

Ceredigion Council are currently seeking your views on their plans to create more cycle routes across the county. If you live locally and would like to comment on them please visit

I am the Sustainable Development Advisor at Cwmpas, an author and project manager with thirty years experience working on environmental and housing projects.

What’s in the blog

I blog about sustainability, climate change, equity, housing, social enterprise, cycling, my life and work in Wales. If you dig deep you will also find lots of gardening advice!

My Tweets
Join 373 other subscribers